Data management company Confluent has announced an update to their Apache Kafka platform. In a Dec. 8 release, the company said Confluent 2.0 boasts improved enterprise security and quality-of-service capabilities, as well as new features designed to boost and simplify development. 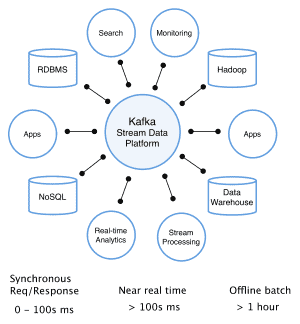 Apache Kafka, a real-time scalable messaging system, is often used as a central nervous system in IoT or other real-time data applications, making data available to systems with different requirements, such as Apache Hadoop versus stream-processing engines that transform data in flight.

“Kafka is becoming much more popular, as evidenced by the growing number of tools that are out there, and it anchors a stream processing ecosystem that is changing how businesses process data,” said Doug Henschen, vice president and principal analyst at Constellation Research.

Confluent, which was founded by the creators of Kafka, said its Platform 2.0 includes a range of new developer-friendly features, including a new Java consumer that aims to simplify the development, deployment, scalability, and maintenance of consumer applications using Kafka. There’s also a supported C client for producer and consumer implementation.

According to Confluent, businesses often use Kafka to build centralized data pipelines for microservices or enterprise data integration, such as high-capacity ingestion routes for Apache Hadoop or traditional data warehouse. Kafka is also used as a foundation for advanced stream processing using Apache Spark, Storm, or Samza.

> Read more: How MemSQL uses Kafka and Spark for clients such as Pinterest and Comcast

For enterprises, new features in Confluent 2.0 include: